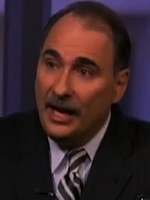 Chris Wallace pressed the President’s chief advisor yesterday on Fox News Sunday about the administration’s decision to continue the moratorium on deep water drilling. Louisiana officials had warned the President that the moratorium would send idled rigs to other locations, like Africa. Well, its happening and all the administration can muster is “it’s not an optimal situation.”First the facts, via Ace.

Devon Energy Corp. had been leasing the Endeavor to drill in the same region of the Gulf as BP’s leaking Macondo well, which has been gushing crude since a lethal blowout April 20.

But Diamond announced Friday it will lease the rig through June 30, 2011, to Cairo-based Burullus Gas Co., which plans to send the Endeavor to Egyptian waters immediately.

Larry Dickerson, CEO of Houston-based Diamond, signaled that other of his company’s rigs could be relocated, too.

Ace has a great take on this including a look at why the courts won’t stop Obama … and yesterday Axelrod’s dismissal of the rigs leaving, is just further proof.

Stimulus: How many jobs were created?

Off shore drilling in the Gulf will continue…sort of

George Will: Just who is the snake oil salesman anyway?
Scroll to top