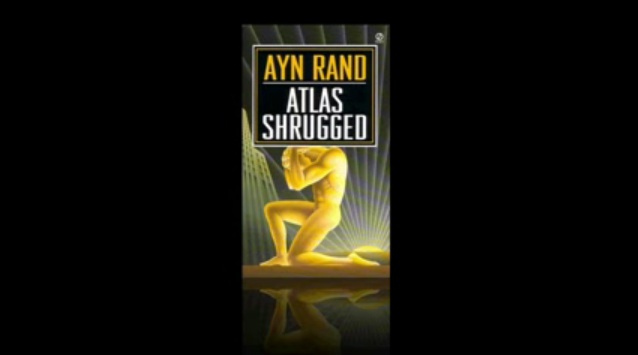 Ayn Rand may have gotten it right when she wrote ATLAS SHRUGGED in 1957, 54 years ago.

Saturday evening was a bit raw and damp, and the rain poured down from the skies above as I walked into the crowded LOWES theater in Plainville, CT.  Having purchased my tickets online to ensure that I would get in, expecting a sell out crowd, I was amazed that for the 7:45pm showing that the theater was only about one third filled.  None the less there in front of me was the silver screen. Popcorn and soda in hand I settled in to my seat to watch the long awaited movie version of the book.

I admit that I have not read the book, and knew little of the storyline.  With the previous fact in mind,  I felt that I was lacking some background information with regards to the characters and story line.  Having this shortcoming  I believe that if the film had been an additional 15min longer that it would of given time for the filmmakers to develop the story and to fill in some important information.

The main story line, mind you written 54 years ago is strikingly similar to what is occurring today: government take over of privately owned corporations, especially the manufacturing sector,  government control over pay and how much anyone company can produce, and the obligatory government mandated “Shared sacrifice”.

As the Government tries to impose its heavy rules and regulations on corporations, wealth and capital disappear, as do the producers of that wealth. In essence, the producers, the capitalists, the creators of wealth, go on strike.

As the movie progressed comes one scene that, just like Chris Mathews, sent a thrill all up and down my leg.  The Union Representative who represents railroad engineers, explains to Ms. Tagart that no one from their union will be allowed to work on her rail line. Not only was the government dictating what corporations could do, so was the union. Our heroine, Ms. Tagart basically gave the union an ultimatum: either drive the train or your union will never work on my rail line.  The look and reaction of the Union Representative was to say the very least…. priceless.

Over all I would say that the movie deserves 4 stars out of 5.  This is not a movie that teenagers are going to go see, and if you are looking for action, adventure, or a thrilling experience, you are not going to find it in this movie.  But what you will find is a message that government rules and regulations will eventually strangle the private sector, and choke off the very capital that makes an economy prosper.

Krauthammer: Trump is the Al Sharpton of the Republican party
Scroll to top