There have been a couple of NASA missions to rehab the Hubble telescope that has provided some pretty amazing images over the past few years. Seven astronauts are heading up this afternoon, for what is being described as a pretty dangerous mission.

I had not heard this, but the mission has a back up team in-waiting if there is a need to rescue the crew. As a matter of fact, NASA only approved the mission if a back-up shuttle was available to go up and rescue the crew within one week.

If the Hubble repair crew due for liftoff on Monday got into the deepest sort of orbital trouble, yet another shuttle would have to be launched into orbit as little as a week later. NASA hasn’t launched two piloted spacecraft so close together in more than 40 years. But that’s just the first act of the drama.

The rescue shuttle, Endeavour, would have to pull within about two dozen yards of the stranded shuttle Atlantis, and then help Atlantis’ crew members make their way across a lifeline to refuge. Then Endeavour, full to capacity, would have to leave Hubble as well as Atlantis behind and return home — but not before Atlantis’ controls are set for a self-destruct sequence. 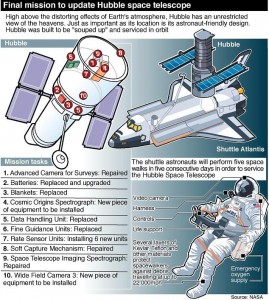 The reason why this is a big deal? Hubble is up at 350 miles, 100 miles higher than where the shuttle normally flies. Click on the image to the right to see a recap of the mission from NASA.

Among the greatest hazards facing Atlantis is the intense amount of space junk – such as broken satellites and dead rockets – that is cluttering the area where the shuttle will rendezvous with Hubble.

Shuttle flights usually only go to the International Space Station no more than 250 miles up – but at 350 miles, where Hubble flies, the hazards are far greater.

If Atlantis suffers damage, the crew  would be marooned.

Everyone remembers the past Hubble missions as being quite spectacular, and this one will be no different!

AJStrata and Malkin have a couple of posts and comments. 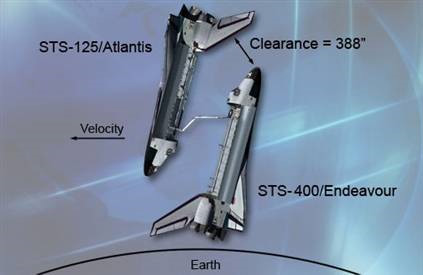 That’s it – Space Shuttle lifts off for the last time, Atlantis heading for Space Station