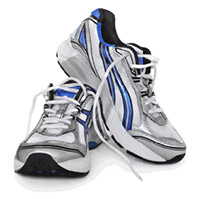 I found this story in The Hartford Courant and thought it might be worthy of discussion. In short, a 1941 federal law requires most military clothing be made using domestic materials by domestic suppliers, but for some time now running shoes have been exempt from the law for the simple fact there are few domestic makers of running shoes.

The government’s solution to the problem was to provide $75 per year to members of the military to cover the cost of running shoes. In other words, military personnel buy shoes where they want and are reimbursed  for the sneakers.

As someone who runs a little bit, I know picking the right shoe is important for my feet, knees and legs. Every person is different. I ran with two pairs of very good quality shoes that did not work for me. A third pair hit the mark. A quick look at Amazon* indicates more than 45 different manufactures providing more than 7,000 choices of running shoes for men. I like choice. I like competition. This paragraph in the story caught my eye. My emphasis in bold.

“If you take all the items on the foot, every piece of that is procured under the Berry Amendment except athletic shoes, and there’s no good rationale,” said Matt LeBretton, head of public affairs for New Balance. “All along we’ve said there needs to be a competitive bid environment.”

New Balance – based in Massachusetts if I remember correctly – proudly has a Made in the USA page on their website, which states …

One out of every 4 pairs of shoes we sell in the USA is made or assembled here. Where the domestic value is at least 70%, we label our shoes “Made in the USA.”

OK, that’s great. If a New Balance shoe works for me, I would buy those shoes even if they cost a few more dollars to support the company. That said, let’s go back to LeBretton’s quote.

“All along we’ve said there needs to be a competitive bid environment.”

The U.S. House of Representatives approved a version of the defense budget weeks ago that would require that the military buy domestically sourced shoes. With approval from the Senate and President Obama, New Balance would be one of two shoe companies with the ability to compete for the contract. (The other is Wolverine Worldwide, which makes Chaco, Merrell, Patagonia shoes, as well as Bates, a brand already used by the military.)

So by cutting the brand choice from more than 45 suppliers to one suppliers what will happen? Why is that a good thing? And remember, right now military members have access to 7,000 model choices. How many models of shoes will the one “official” supplier be able to provide? What if the “approved” footwear does not fit or causes knee pain?

I understand about “keeping jobs in the USA” but let me be clear, this is all about lucrative federal government contracts that generate a constant revenue stream for the winning bidder.

* I buy at a local store that specializes in running shoes. If I bought them online I may save a couple of dollars, but the local store helps me get the right fit and that’s important. It is extremely rude and disrespectful to walk into a store, be fitted for shoes, clothes or something else, only to leave and make the purchase online. Don’t use local retailers as a place to find your size if you’re going to buy online.

Not in the statistics – Massachusetts store clerks stops robbery with...