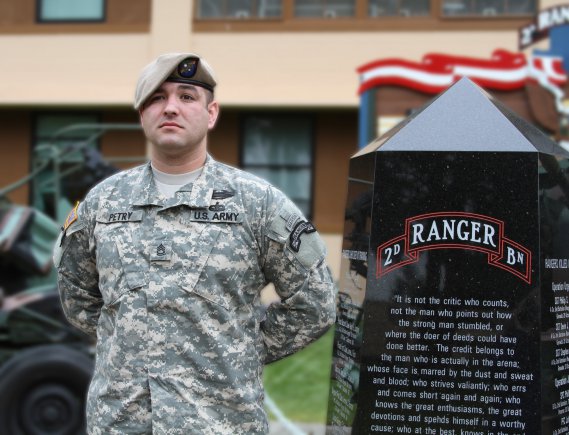 Sgt. 1st Class Leroy Arthur Petry is someone you should know. Petry will be awarded the Medal of Honor for his courageous actions in Afghanistan on May 26, 2008 – just more than three years ago – when he lost his right hand and suffered shrapnel wounds after he tossed a live grenade away from himself to protect  platoon members during combat operations.

From the official page of the United States Army. Read the entire thing…

WASHINGTON (Army News Service, May 31, 2011) — An Army Ranger who lost his right hand and suffered shrapnel wounds after throwing an armed grenade away from his fellow Soldiers will be the second living Medal of Honor Recipient from the conflicts in Iraq and Afghanistan. 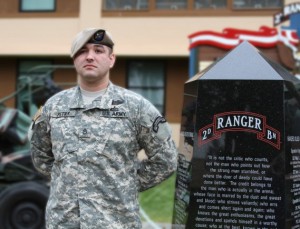 “It’s very humbling to know that the guys thought that much of me and my actions that day, to nominate me for that,” said Petry, on learning he had been nominated for the medal.

At the time of his actions in Afghanistan, Petry was assigned to Company A, 2nd Bn., 75th Ranger Regiment at Joint Base Lewis-McChord, Wash. Petry’s actions came as part of a rare daylight raid to capture a high-value target.

On the day of the actions that would earn Petry the Medal of Honor, he was to locate himself with the platoon headquarters in the target building once it was secured. Once there, he was to serve as the senior noncommissioned officer at the site for the remainder of the operation.

Recognizing one of the assault squads needed assistance clearing their assigned building, Petry relayed to the platoon leader that he was moving to that squad to provide additional supervision and guidance during the clearance of the building.

Once the residential portion of the building had been cleared, Petry took a fellow member of the assault squad, Pvt. 1st Class Lucas Robinson, to clear the outer courtyard. Petry knew that area had not been cleared during the initial clearance.

Petry and Robinson, both Rangers, moved into an area of the compound that contained at least three enemy fighters who were prepared to engage friendly forces from opposite ends of the outer courtyard.

The two Soldiers entered the courtyard. To their front was an opening followed by a chicken coop. As the two crossed the open area, an enemy insurgent fired on them. Petry was wounded by one round, which went through both of his legs. Robinson was also hit in his side plate by a separate round.

While wounded and under enemy fire, Petry led Robinson to the cover of the chicken coop. The enemy continued to deliver fire at the two Soldiers.

As the senior Soldier, Petry assessed the situation and reported that contact was made and that there were two wounded Rangers in the courtyard of the primary target building.

Upon hearing the report of two wounded Rangers, Sgt. Daniel Higgins, a team leader, moved to the outer courtyard. As Higgins was moving to Petry and Robinson’s position, Petry threw a thermobaric grenade in the vicinity of the enemy position.

Shortly after that grenade exploded — which created a lull in the enemy fire — Higgins arrived at the chicken coop and assessed the wounds of the two Soldiers.

While Higgins evaluated their wounds, an insurgent threw a grenade over the chicken coop at the three Rangers. The grenade landed about 10 meters from the three Rangers, knocked them to the ground, and wounded Higgins and Robinson. Shortly after the grenade exploded, Staff Sgt. James Roberts and Spc. Christopher Gathercole entered the courtyard, and moved toward the chicken coop.

With three Soldiers taking cover in the chicken coop, an enemy fighter threw another grenade at them. This time, the grenade landed just a few feet from Higgins and Robinson.

As Petry released the grenade in the direction of the enemy, preventing the serious injury or death of Higgins and Robinson, it detonated and catastrophically amputated his right hand.

With a clear mind, Petry assessed his wound and placed a tourniquet on his right arm. Once this was complete, he reported that he was still in contact with the enemy and that he had been wounded again.

Higgins and Robinson returned fire and killed the enemy.

Higgins later wrote in a statement, “if not for Staff Sergeant Petry’s actions, we would have been seriously wounded or killed.”

Petry is the ninth servicemember to have been named a recipient of the Medal of Honor for actions in Afghanistan and Iraq. Of prior recipients, all but Petry and Staff Sgt. Salvatore Giunta were awarded the honor posthumously.

Petry currently serves as a liaison officer for the United States Special Operations Command Care Coalition-Northwest Region, and provides oversight to wounded warriors, ill and injured servicemembers and their families.

He enlisted in the United States Army from his hometown of Santa Fe, N.M. in September 1999. After completion of One Station Unit Training, the Basic Airborne Course and the Ranger Assessment and Selection Program — all at Fort Benning, Ga. — Petry was assigned to 2nd Battalion, 75th Ranger Regiment. Petry has served as a grenadier, squad automatic rifleman, fire team leader, squad leader, operations sergeant, and weapons squad leader.

He has deployed eight times in support of the War on Terror with two tours to Iraq and six tours to Afghanistan.

Petry and his wife Ashley have four children, Brittany, Austin, Reagan and Landon.

Wikileaks: Do they care information could put Afghans in danger?

Palin rides with the “hogs” into DC … Matthews asks “Who...