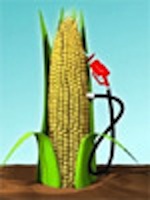 Yesterday, the EPA decided, over the objections of most automobile manufacturers, that it would “allow ” a mixture of 15% ethanol in all gasoline sold in the United States for all model year 2001 through 2006 cars.  Last October it did the same for all model year 2007 and later.  By now you know that the word “allow” in government speak means “mandate”.  But, how we got here, as well as its consequences, is yet another example of what I will call, “bureaucratic blinders”.

Meanwhile, also  per government mandate, our cars have become more and more fuel efficient, and so we are consuming less and less fuel, and thus less and less ethanol.  Logic would dictate that the EPA would revisit the original rule and mandate less and less total gallons of ethanol consumption to match our greater fuel economy, but, government is far from logical.  And so, we all run the risk of voiding our car warranties in order to meet an EPA standard that no longer makes any sense.

But, the effect of the EPA’s rules is even more damaging, this time to our economy.  Ten years ago 7% of our corn production was devoted to ethanol production.  That number rose to an astounding 39.4% in 2010.  That translates into less corn available for food, and a resulting higher price for corn.  Although you may think you are not affected by this, you are.

Corn is used as feed for animals.  So, as corn prices rise, so too does the price of beef and chicken, as well as the price of milk, eggs, butter, cheese, and anything else that is produced with corn.

The irony here is that recently none other than the EPA,

…has found that ethanol production has a minimal to negative impact on the environment.  Even Al Gore, once an ethanol evangelist, now says his support has more to do with Presidential politics in Iowa and admits the fuel provides little or no environmental gain. [emphasis supplied]

And, were that not enough, last December our “lame duck” Congress threw another $5 billion in tax subsidies to ethanol.

The movie clip Jim uses each day to open his show comes to mind.  “Do you know what a zombie is…”

I’m getting tired of being left, holding the bag

Supreme Court slaps down the EPA

Your chance to speak out against ethanol
16 replies