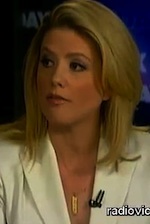 This is just too much. How a wizard of smart can appear on a Sunday Morning Talk show to talk about illegal immigration and not have read the law. I love Kirsten Powers because she is generally pragmatic, but clearly when you get into a smack down with Brit Hume, you had better know your stuff. Or, in this case, did she know her stuff but rather exposed her bias?Once again the question on the Sunday morning talk show, Fox News Sunday, concerned immigration. Brit Hume had just finished making the point (correctly) that the Federal Immigration Law is tougher than the Arizona law since the Arizona bill specifically states that an immigration check can only come in the context of first, a legal violation and then only if reasonable suspicion exists that the person being queried is in the US illegally. Race may not be a factor. That is not the case with the Federal statute which you can read here.

But Kirsten runs headlong into the lefty line that this nonetheless will lead to racial profiling and discrimination against brown people, yada, yada, etc, etc and Brit’s head explodes. My favorite part is toward the end where Kirsten leans on the old … we all know what cops are like line. Take note you police officers. This is what the left really thinks of you.

Kinda reminds me of The One, when he said the Police acted stupidly, doesn’t it? Ahh lefties, they always tell you who they are.

Unless Whitman plans on rolling tanks up and down the joint border with Mexico, which would arguably be an even bigger intrusion on federal responsibilities, “enforcement” has to include checking the status of people detained by the police for other purposes when they are suspected of not being in the country legally. Which, by the way, is how California’s penal code reads now.  As Kerry Picket noted a week ago, Section 834b of the Penal Code puts California law enforcement in exactly the same position as their Arizona brethren:

Ben Stein and Kirsten Powers Mix It Up

Why are the police the only group penalized for alleged racial profiling?

SEIU members: Are you proud your brethren terrorized a teenager?

Biden suggests Brussels, Belgium may be true “capital of the free wor...
Scroll to top