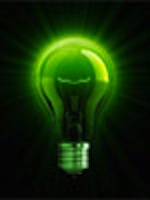 …light of your own choosing, that is.

On Friday, the House passed a $1 trillion spending bill that is designed to keep the government running until the end of the fiscal year in September, 2012.  Typically, such a bill is unnecessary because Congress passes a budget before October 1 every year.  However, this year, as last, the Senate has refused to either pass a budget, or approve the budget passed by the House.

The Senate is expected to approve the House bill today.

Contained within the 1220 page bill is good news for anyone, who, like my brother, cannot be around fluorescent light bulbs.  It is also good news for anyone who believes the federal government should not be able to dictate every facet of their lives.

The bill…effectively blocks new Energy Department standards promoting the use of energy-efficient light bulbs by barring money for enforcement.

Of course, Energy’s rules are still on the books, but, the “light police” will be denied the money needed to sweep into every store in America, and, much like the “revenuers” of old, smash every non-conforming light bulb.

Now, if we can just get a reasonable person into the White house in 2013, one who is not beholden to the “greenies” of the world, maybe the current rule will go away as well.  The new rule would go something like this…if you want to use CFL’s, be my guest, if you don’t want to use CFL’s be my guest…the choice is yours.

Our future lights…LED’s, well, perhaps, not so much

Republicans are finally “catching on”
Scroll to top