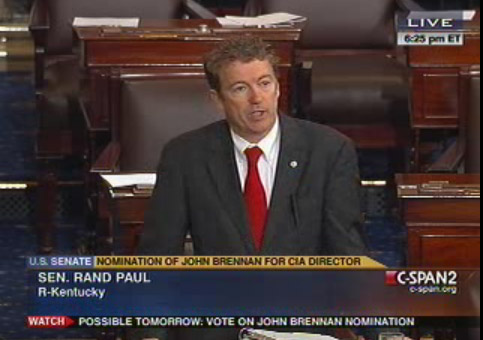 We have leadership who are starting to step up. The expansion of the federal government, extension of powers must roll back. Sen. Rand Paul (R-Ky.)  has stepped up to make a statement which was kicked off by Attorney General Eric Holder’s answer about drone strikes within the United States against Americans.

The administration has been wishy-washy about this for days, and Rand Paul is making a statement that will hopefully get some people fired up about all of this. Look, Holder eventually grudgingly said “no” to the question if it would be Constitutional for the government to kill an American citizen with a drone strike inside of our borders when they are not a true imminent threat. Holder really was trying to wiggle out of that question earlier today. Remember, the Obama administration has a very strange definition of an imminent threat.

Multiple Senators have stepped in to ask Paul lengthy questions to give him a break … but he’s still going as of 6:35 p.m. ET. Click on the image to watch the live video feed on C-SPAN. Just now, Paul is being asked a question by Sen. Jerry Moran (R-Kan.). Will this stop Brennan’s confirmation? Nah, but it’s kind of fun.

What would be really cool is if President Obama stepped out and answered the question in a straightforward manner to put an end to this. That’s all the president would have to do, but I don’t think he would ever do it simply because he would be buckling to Paul and the Senate.

Rand Paul To Republicans: We are co-opting you

Percentage of part-time workers looking for full-time work back at 2 year h...
Scroll to top