Federal officials who are fond of feeding children in need have determined the self esteem of kids has suffered because they get a free lunch at school. So instead of promoting programs to lift the spirits of the kids -and improve the economic situation for the families – they’re going to give free lunches to all the kids.

Nanny state 101. Get those in need dependent on the government as soon as possible. Then expand. From Henry Payne over at The Corner a few days ago gives us this tid-bit about the  recent $4.5 billion expansion of the Healthy Hunger-Free Kids Act.

“We’ve worked very hard to reduce the stigma,” Aaron Lavallee, a U.S. Department of Agriculture spokesman, told the Detroit News. “We’re seeing a lot of working-class families who’ve had to turn to free school meals to feed their children.” …

“Now all students will walk through a lunch line and not have to pay,” says Mark Schrupp, Detroit Public Schools COO. “Low-income students will not be easily identifiable and will be less likely to skip meals.”

As of 2010, Michigan has one of the highest rates of obesity – for adults – in the country at 30.9 percent. Only Mississippi (34 percent) and South Carolina (31.5 percent) have higher obesity rates, so although they certainly may not be eating healthy, the state’s populous does not seem to be in the habit of skipping meals. 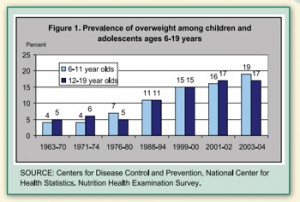 In an undated document on the Michigan.gov website (I think it is from 2008), we find the state has dozens of programs to fight childhood and teen obesity. The document identifies the trends which do not look good at all.

The chart to the right (click to expand) shows that 19 percent of 6 to 11 year-olds were considered overweight in 2004. Sorry, I just don’t have the time to find more current information, but I don’t think the trend has reversed.

The programs? The document entitled the Statewide Scan of Childhood Obesity Programs, Policies and Resources in Michigan identified 122 programs for high school kids and 122 programs for middle school students.

So how are those school lunches anyway?

Although the results are not in after the implementation of the 2010 Child Nutrition bill – the same bill that expanded the role of the federal government in feeding kids by $4.5 billion – the food quality at schools was considered lower than that of fast food joints.

The safety initiatives in the Senate bill [same as noted above] follow a USA TODAY series that found dangerous flaws in government programs that are supposed to guarantee that food served to students is free of E. coli O157:H7, salmonella and other contaminants.

The newspaper found that 23,000 children were sickened by food they ate at school from 1998 through 2007, and it highlighted instances in which schools unwittingly served students food that had been recalled. The newspaper also found that norovirus, usually linked to improper food handling, is the most common food-borne illness in schools, yet about 26,000 school cafeterias have not had mandatory, twice-yearly inspections.

“Schools aren’t getting all the information they need from the federal government to keep our kids safe from tainted products,” said Sen. Kirsten Gillibrand, D-N.Y. Gillibrand added language to the bill that would direct the USDA to develop new procedures for giving schools advance warning when a product in school meals is facing a recall.

Once the 2010 legislation became law later in the year, the trend in the media seemed to have changed. (OK, maybe it hasn’t since you can find pro and con stories all over the place over the years.) Maybe there was some funding in there for marketing to attack the practice of making lunches for your own kids and sending them to school with it? Within the last few weeks, we’ve seen stories about the dangers…

Goodness … maybe it really is better not to eat…

In April I noted a Chicago school was outright banning parents from sending their kids to school with their own lunch.

There are huge economic and health issues to deal with when it is expected more than 100 million Americans will be obese within the next decade and one of every five health care dollars will be used to treat obesity and diabetes by 2018.

Thank you, Michelle, for making our kids healthy

Hurricane Irene: it looks like New England’s on the bad side of the s...
Scroll to top