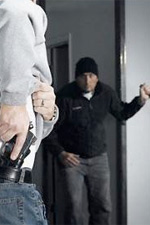 Another story I’ll bring to you since there is little chance the main stream media will do it. A home invader broke into the home at 3 a.m. on Tuesday morning in Alabama…

Our buddy John Hinderaker brings us the best quote posted over at a North Carolina gun blog.

When momma’s got a gun and her two daughters can quickly lay their hands on a butcher knife and an axe, you’ve become the very definition of “failure in the victim selection process.”

Damn straight. From The Blaze.

Martha Lewis of Dora, Ala. told WVTM-TV it was about 3 a.m. Tuesday morning when she heard a loud noise, which turned out to be someone kicking in her door. Lewis said she called the police and grabbed her gun, then went to her daughters’ room and told them each to get something to defend themselves with. She said one grabbed an ax and one got a butcher knife.

They were at the top of the stairs when they saw a man standing there at the bottom.

“I knew when he stepped on the landing that I would have to shoot him,” Lewis told the station. “He starts like coming up the stairs and he said, ‘would you shoot me?‘ And I said ’I don’t want to have to but I will.’”

Ignoring her warnings, the man kept coming — and that’s when Lewis said she fired.

For those of you who think people should be banned from carrying a self-defense firearm openly or concealed in public, how do you justify allowing this women and her children to be attacked, raped or murdered outside the home? What is the difference? Why is there some magical line drawn once you step outside your home where the law should change and you are not allowed to protect yourself with a firearm; depending exclusively on luck, retreat or law enforcement to protect you?

As a reminder, there were multiple law enforcement officers at the Aurora, Colo. movie theater when the shooting started on July 20.