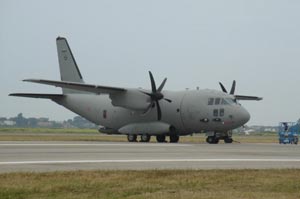 In short, the Air Force was forced by politicians in Ohio to spend $1.6 billion on 21 C-27J Spartan aircraft they never really needed or wanted. It turns out, the Spartan is extremely expensive to operate and maintain compared to the currently-in-operation C-130 Hercules, and the Hercules can pretty much do everything the Spartan can do. From DOD Buzz, with my emphasis in bold.

… the first twelve [C-27J Spartan’s] have been taken out of service and shipped to the boneyard at Davis-Monthan Air Force Base, Ariz. Even more C-27Js are set to be delivered to the Air Force only to be sent immediately to the boneyard. …

The original plan was to field a fleet of 38 C-27Js across the service as part of the Joint Cargo Aircraft Program. The Air Force had 15 C-27Js stationed at Guard bases and another two at Waco, Texas, at a L-3 Communications plant. Four more are on the books to be built by Alenia Aermacchi in Italy and sent to the U.S. in fiscal year 2013. Those newly built aircraft were scheduled to be sent directly to the boneyard.

The Air Force spent about $1.6 billion to purchase the 21 aircraft. Soon after the first C-27Js arrived in Afghanistan in 2011 to start resupplying deployed Army units, the Air Force said it could no longer afford the luxury of the aircraft. …

Air Force officials maintain that the service hasn’t necessarily scrapped the aircraft. Instead the service is still waiting to hand off the C-27J to other agencies. No agencies have yet publicly said they want to obtain the aircraft.

From what I understand, one or two of the aircraft have now been spoken for. The Forest Service picked one up to be converted into a tanker to fight forest fires, and from what I hear, a portion of the current fleet is getting pretty tired and needs to be replaced.

Ohio’s Senate delegation was among the most ardent defenders of the C-27J when a mission at Mansfield Air National Guard Base, and 800 jobs there, were dependent on it.

Sen. Sherrod Brown of Ohio and six other Democratic senators wrote a letter in 2011 urging the military to purchase up to 42 of the aircraft, saying too few planes “will weaken our national and homeland defense.”

Then came sequestration, and a nearly trillion dollar cut to the Pentagon’s projected spending over the next nine years. That will bring the military’s budget down to roughly 2006-2007 levels, Rosenkranz said.

Former Air Force Chief of Staff Gen. Norton Schwartz testified before Congress last year that the military wanted to divest its C-27J fleet to come in line with budget cuts. He said the C-130 can do everything currently asked for and costs $213 million to fly over its 25-year lifespan. The C-27J, on the other hand, would cost $308 million per aircraft.

“In this fiscal environment it certainly caught our attention,” Schwartz said.

That put the Mansfield base in peril, and Brown along with Republican Sen. Rob Portman, who in February 2012 called the aircraft “critically important,” worked to save the C-27J.

Did we ever need these aircraft for their original purpose? Probably not, and there is plenty of evidence the “job-saving” push was influenced by congress-critters in Ohio, as well as Level-3 and Alenia North America who respectively hold maintenance/training contracts and manufacture the aircraft. From ROYT News, which seems to be a media arm of the left-wing Brookings Institute.

Both groups have spent millions lobbying through their PACs, and contributed over a million dollars to the last election alone, according to the Center for Responsive Politics. All of this reinforces the reality that lawmakers and government officials are easily persuaded to act by campaign contributions and to keep military jobs secure.

Expense accounts for House and Senate members add up

The census plan – proving bureaucracy does not work (Update)

More waste…this from the Department of Agriculture

Let’s stop making these $1 presidential coins shall we?