I certainly hope that this will not turn into a weekly feature, but the amount of news, sound bites, and heated rhetoric pouring in from every direction resulted in Jim and myself electing to take a knee for the past 48 hours when it comes to posting AIG articles.

That said, we’re slowly putting our toes back into the water and I’ve put together a recap for you to absorb this weekend. That way, you can get all fired up about it again on Monday morning.

History
AIG Financial Products (AIGFP) is a small division of AIG born in the late 1980s. The idea was to use AIGs strong credit rating and get involved with derivative trading – usually the purview of financial institutions – and make profits that would be split between AIG-proper and AIGFP. Even though derivative trades normally took years to pay out, AIGFP received profits up-front, with AIG holding most of the risk.

In the late 1990s, AIGFP got involved with credit default swaps (CDSs) by insuring the corporate debt of financial institutions like JP Morgan. AIGFP was hedging, treating the CDS business as they do other insurance lines of business. They bet that very few customers – like JP Morgan – would default on their corporate debt.

After AIGFP got rolling, the Republican Congress enacted, and President Clinton signed, the Commodity Futures Modernization Act into law in 2000, attached t0 – get this – another one of those huge omnibus budget bills that nobody seems to read. Not designed to weaken regulation, the act made the system more complex and opened doors to other ways of trading derivatives like credit default swaps.1

In March of 2005, AIGFP employee count had grown to about 400, and the New York attorney general was investigating AIG-proper’s accounting practices. Hank Greenberg, who ran AIG since the late 1960s was out, and the credit rating of the corporate giant was downgraded.

With their credit rating lower, and lots of the CDOs tied up in sub-prime mortgages, AIGFP was about to get squeezed – really hard – from both sides.

In late 2005, AIGFP pretty much got out of the CDS business due to the risk, but they could not undo the billions of CDOs already on the books.

With their credit rating lowered and the mortgage crisis hitting hard in late 2007, AIGFP was getting phone calls from investment firms like Goldman Sachs demanding billions to cover losses from mortgage-backed securities the AIG CDSs had insured.

The dominoes started to fall, AIGs credit rating declined, more phone calls came. Even when the writing was on the wall, AIGFP CEO Joseph Cassano and AIG CEO Martin Sullivan put on a consolidated front – the investments were solid.

AIG continued to loose billions. Cassano was gone by April 2008 and Sullivan by late June. A new CEO – Robert Willumstad formerly CEO at Allstate – was hired in June, but was gone by September and replaced by Edward Liddy when the government injected $85 billion in cash – with billions more to follow – to help save AIG while taking 80 percent ownership of the company.

It’s important to note that Liddy was called out of retirement by the new owners – the federal government – to guide AIG out of the mess it was in. His salary is one dollar per year.

In October, Gerry Pasciucco was brought in to lead AIGFP and try to figure out the tangled mess of derivatives with the remaining employees. I include his photo (right) just so readers can wonder about the Che T-shirt.

The following is from a letter (PDF, 2KB) written on Dec. 1 from Rep. Elijah Cummings (D-Md.), the full PDF is courtesy Salon.com and an article by Glenn Greenwald on March 19. It indicates that the day after Liddy came to AIG, the retention bonus program was put into place.

There is no way Liddy put this program into place in eight business hours, it was planned by former CEO Sullivan or Willumstad. 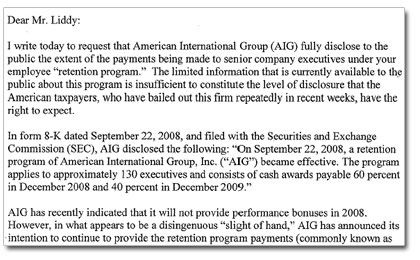 From Hinderaker at Power Line, with my emphasis…

If you were one of the 400 employees in a dead-end job trying to untangle a $2.7 trillion dollar problem would you stick around? Those employees – with knowledge – could possibly take off without the retention bonus program. My interpretation was if they stayed for specified periods of time they would get a certain retention bonus. The longer they stayed, the greater the bonus. Yes, some may have stay only for a certain period of time, but they stayed long enough – per contract – to get a retention bonus that was paid last week.

Now, if you were still at AIG and trying to work out the remaining $1.6 trillion problem, would you stick around as AIG corporate security advises you how to protect yourself? Maybe you’d feel OK about a United States senator suggesting you commit suicide? Screw the $1.6 trillion, I might walk.

But Edward Liddy isn’t walking. During the theatrical presentation on the Hill the past couple of days, Liddy was crucified by some members of Congress who refuse to acknowledge that Liddy was brought in to clean up the mess after the fact. Liddy is a man who knew what was coming, walked in and took it like a professional. I’m not sure if he will succeed in leading AIG out of this mess, but for darn sure he knows that Congress doesn’t care one whit about him.

What happens to that $1.6 trillion if – let’s say – half of the employees quit? Just wondering…

The theatrics of outrage
Outrage this week comes from every American and politician froma coast to coast, but Senator Chris Dodd (D-Conn. & Iowa) is getting the brunt of it. I actually feel bad for the guy since he’s so disliked everywhere. But I want Connecticut to have a glimmering shade of red in the future so I want him gone from office too.

Chris Dodd would appear to be being cast in the Lou Costello role — the hapless peanut-vendor who just doesn’t seem to “get” it, while Barack Obama, among others, takes the Bud Abbot role — the slick, smooth-talking manager who leads his hapless counter-part around the infield legislation, manipulating the senior senator from Connecticut to their own ends.

First Dodd said he knew nothing about the clause that protected the retention bonus program – big mistake – then he said he knew about it but it was not his idea and did not know why it was there. Then he said it was the Executive Branch and we finally learn that it was Treasury Secretary Timothy Geitner who demanded the change.

Now Dodd has suggested – and Congress is already working on – a bill to selectively tax the AIG employees who received retention bonuses.

The big picture
Goodness, we’re talking about $165 million in bonuses paid out to employees and AIG has gotten $170 billion from the federal government since September. We’re talking about less than one-tenth of one percent here for the retention bonuses. This group of employees seem to have successfully negotiated AIG out of $1.1 trillion in exposure in the past seven or eight months.

Is this a Congressional diversion to take the eye of the people – and the media – off the real problem?

1700-plus words… I don’t think I spelled anything wrong…

1 The act would again permit single stock futures contracts, allowing investors to treat stocks like commodities and resolving the disputes between the Commodities Futures Trading Commission (CFTC) and the Securities Exchange Commission (SEC) as to which regulating body would regulate the market.

As a side note, the act included language excluding energy commodity trading from regulation by the CFTC or the SEC. This allowed Enron to launch EnronOnline, their Web based commodity trading application that was the companies downfall. Sen. Phil Gramm (R-Texas) worked with Enron lobbyists to include the language in the omnibus bill.

Banana In The Tailpipe
Shocked ... Shocked I Tell You
Oh what a tangled web we weave ...
Barney Frank on Religion and Taxing Executive Pay
The Deal Behind the AIG deal - Video: Warren vs Geithner
Taxing banks guaranteed to increase fees, tighten lending
Will there be outrage? Citigroup boosting salaries
AIG Bonuses are justified and necessary, an alternate view