Will Katherine Conway-Russell, office director at the Philadelphia ACORN office be fired? Will the main stream media post dozens of required retractions since they claimed James O’Keefe and Hannah Giles were kicked out of the ACORN office? Will Media Matters disown ACORN and post their own retractions? Update: More video added.

We’ll have to see, but I find it interesting that Andrew Breitbart is providing just enough time between ACORN visit video releases to allow the main stream media, liberal sites like Media Matters and ACORN themselves to dig such a canyon of a hole for themselves.

I think it is great.

Hat tip to Ed over at Hot Air, but here is the video from Big Government’s first video post on the subject. The sound seems to be heavily edited, with the audio from Conway-Russell mostly removed from the video. It’s been posted by Big Government’s James O’Keefe.

O’Keefe promises to release the full, unedited version of the video – about 32 minutes of audio and 26 minutes of video – later in the day. The people at ACORN seem to lie a lot.

Update: O’Keefe posts about muting the audio from Conway-Russell. Maybe O’Keefe can post a transcript of the text? Or maybe have a voice-over reading from a transcript during the video?

**UPDATE 2:24 PM EST** We muted the audio of the ACORN employees on the video released today due to ACORN’s legal attack upon us.  We call upon ACORN to state publicly now that it has no objection to the public release of any its employees oral statements to us.  If they are interested in the truth, why wouldn’t they do so?

Billy Hallowell, also posting at Big Government, reviews just some of the media reporting after the first series of ACORN videos were released.

Exit question: Remember the police report that was filed in Philadelphia that listed O’Keefe as the “offender” who had “come into the above location [ACORN’s office] to apply for low income housing and was causing a verbal disturbance with employees of ACORN…” So what will happen with that report if the video shows there was no verbal disturbance at all?

Note the ACORN complaint did not mention that O’Keefe and Giles were planning on bringing in underage prostitutes to stay at the house temporarily, maybe for a year or so. Conway-Russell clearly heard that part of the plan as shown on the video.

My thoughts? After the meeting, Conway-Russell realized that she’d been punked and needed to quickly figure out a way to cover her own …

More… James O’Keefe posts about the possible false police report I mention above. I’ve added a scan of the report below the videos. 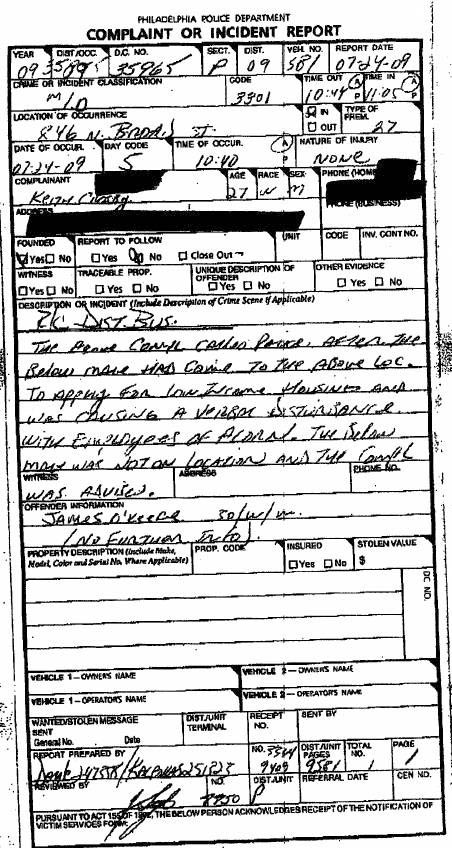