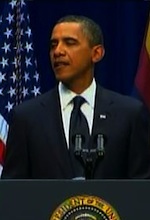 Last month in Tucson, President Obama gave one of his more memorable speeches at the memorial for those slain and injured in the Tucson shooting.  He called for a more “civil and honest public discourse”.

I want us to live up to [Christina Taylor-Green’s] expectations.  I want our democracy to be as good as Christina imagined it.

Sadly, what has happened in Wisconsin recently, shows us how swiftly those sentiments have been left behind.

…in Madison, a crowd of 20,000–many of them teachers skipping school–gathered at the Capitol.  Signs compared [Governor Scott Walker] to Egyptian dictator Hosni Mubarack, Joseph Stalin, and Benito Mussolini.  Still others accused him of ‘terrorism’ and, ‘rape’.  One sign had a photo of the governor in crosshairs: ‘Don’t Retreat, Reload’.

And we had the President himself who, although admitting that he hadn’t really followed what was happening in Wisconsin, told Americans that what the Wisconsin Governor was doing was “an assault on unions”.

Then again, maybe we haven’t forgotten the President’s message of civil discourse.  Maybe it’s only a one way street.

Wisconsin Republican threatened with death by Wisconsin Democrat speaks out.

More Obamacare waivers slip under the radar
Scroll to top