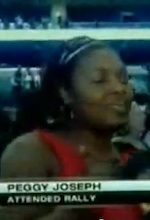 I wish I could take credit for this, but I can’t. My producer Bob Joyce pointed this one out and the more I thought about it, the more I realized he is right. Peggy Joseph is indeed a prophet among us. And you laughed. Ok, and I did too.

First some context. It was an Obama campaign rally in Florida in 2008 and Channel 6 got the chance to interview a young woman who was so excited to see him. Why? Because, she said, Obama would pay for everything. No worries. No more. Go ahead laugh, or cry, but she was a prophet.

So what makes her a prophet? Here are some headlines just from this month.

Main Street may be about to get its own gigantic bailout. Rumors are running wild from Washington to Wall Street that the Obama administration is about to order government-controlled lenders Fannie Mae and Freddie Mac to forgive a portion of the mortgage debt of millions of Americans who owe more than what their homes are worth. An estimated 15 million U.S. mortgages – one in five – are underwater with negative equity of some $800 billion.

Or how about this one?

No gas too. Yikes! Peggy the prophet. Just to put a topper on that one … there’s a rebate to make it more affordable for Peggy too. But come on. In Obama land it’s all free: health care, retirement, college. All from O-B-A-M-A’s stash.

It’s just, well as GM as found out, it’s like selling your soul to the devil.

“We want the government out, period,” Mr. Whitacre said in comments after speaking at an automotive conference in northern Michigan. “We don’t want to be known as Government Motors.”…

Eliminating government ownership, he said, would be good for employee morale and would improve G.M.’s image. While unusual, selling all the shares during an initial offering is not unheard of. The credit card giant Visa raised about $19 billion during an offering in March 2008.

Has anyone thought about going back to Peggy Joseph and asking what else is in our future?

Banker explains why he turned down TARP funds: “Strings”

In United States, 17% work for the government
Scroll to top