The following chart will put the matter in perspective: 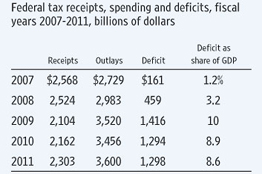 In 2011, we spent the largest amount of money we have ever spent as a nation.  Parenthetically,  I would have hated to see what the expenditures would have been had the “evil Republicans” not insisted upon spending cuts.  Steve did an excellent post on this aspect of the CBO’s report, and, if you haven’t read that detailed analysis, I encourage you to do so.

But, several other points come to mind.

While “laboring” under the Bush tax cuts, in 2007 our annual budget deficit was only (I hate to use that word in this context) $161 billion.  In only 4 years that annual deficit has increased more than 8 times over.

There is something else, though that we can, and should, take from this chart.  The Keynesian economists that our President has surrounded himself with firmly believe that the government can spend the country’s way out of a recession.  This belief has led us to $10.5 trillion worth of spending in the last 3 fiscal years, and a national debt increase of almost $4 trillion during those years.

Isn’t it time that we discarded Keynesian thinking, much as Keynes did shortly before his death, and realize, as President Reagan did, that it is the private sector, not the government that “grows” our way out of a recession?

The Save My Seat Shuffle
10 replies