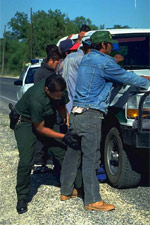 I saw this in Ed Morrissey’s post on the Rasmussen poll results concerning Blumenthal’s poll ratings and it deserves its own post. Sixty-three percent of Connecticut residents want law enforcement officers to verify immigration status during lawful contact.

As a reminder, this was a Connecticut poll of 500 likely voters from yesterday. I’ve reached out to Ed to see if he can provide me with the exact question wording and the breakdowns since I don’t have access to the full survey

From Morrissey at Hot Air, with my emphasis in bold.

There are other interesting results from Rasmussen’s internals, and these don’t look as good for Blumenthal as the toplines do, considering the news from this week.  Ninety percent of likely voters have closely watched the news of Arizona’s new immigration-enforcement law, and a plurality wants a law like that in their state, 48/35.  Sixty-three percent want law-enforcement officers –  in Connecticut — to check immigration status during lawful contact. A 53% majority favors repeal of ObamaCare, with 44% opposing it.  Neither of these go very well with the current Democratic narratives, and those in combination with Blumenthal’s fabulism may turn into a toxic blend come November.

Update: Ed will be able to provide me with details about the question asked, but we’re not sure if we’ll be able to get it to you immediately.

Howard Fineman: Hey, you folks in Connecticut are too smart to elect McMahon, well except Waterbury

Will California “boycott” the energy they get from Arizona?
Scroll to top