Rasmussen Reports has President Obama’s approval index rating at -21 today, which is a tie for his worst, but more notably, 44 percent strongly disapprove of how the president is performing in his role. That’s the same as George W. Bush during his last month in office. 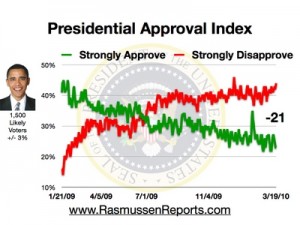 Don’t be surprised to see his ratings fall further over the weekend as people catch up with the news after a few nights of American Idol and working during the day.

Last Friday, Rasmussen discussed Congressional favorability ratings which were even worse than the Executive Branch’s.

Pelosi is now viewed unfavorably by 64% of voters, which ties a high reached in August. That number includes 47% with a very unfavorable opinion of the California Democrat. Twenty-nine percent (29%) have a favorable view of her. Just seven percent (7%) of voters have no opinion of Pelosi.

Senate Majority Leader Harry Reid is now viewed at least somewhat unfavorably by 56% of voters. That’s up 14 points from a year ago and the highest level measured since regular tracking began last February. That includes 35% with a very unfavorable view. Twenty-four percent (24%) view Reid favorably, the lowest level found since December. Twenty percent (20%) have no opinion of the majority leader.

It’s not just the Democrats in Congress, Republicans are not popular figures either, with House Minority Leader John Boehner and Senate Minority Leader Mitch McConnell viewed unfavorably by 41 percent and 31 percent of voters respectively.

The federal government – especially the Executive and Legislative branches – have completely lost any respect they may have had left. More than a year ago, I described the TEA Party movement as a tipping point, and since then I’ve always used TEA as an acronym for taxed enough already (not my idea).

It fits, since more and more people are realizing the power grab from within the federal government with excessive regulation, taxes and their need to be intimately involved with funding everything and anything at the state and local level is the disease that must be cured.

If voters would only focus on the disease instead of the symptoms that have resulted, we may be able to pull our country from the brink of total economic and social collapse.

Update: Ed Morrissey at Hot Air writing on the subject this afternoon.

The Politics of Class Envy

What more can Obama and the government do?

MSNBC reacts to Obama speech: “It was a great speech if you were on another planet for the last 57 days.”
1 reply