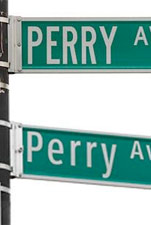 This is one of those stories that will really get TEA Party members all worked up, but it’s for the wrong reason. It makes sense to change from all UPPERCASE to Lowercase as the signs need to be replaced since they really are easier to read. There are issues however.

The federal government has come out with new mandates for street signs, you know, the ones that tell you what street you’re on. Other than the fact the uniformity of all of the signs certainly is boring when it comes to community identity and the federal government mandating such a thing is totally unconstitutional, the lowercase change does make sense.

The city of New York has more than 250,000 of these signs that will be replaced during the next decade and a half. At a cost of $110 per sign, that’s where the New York Post came up with their $27.5 million figure. That’s an expense paid out over 15 years.

Here’s are the real questions, and I really don’t know the answers.

Get worked up about this if you’d like, but I can not figure out why these signs need to be replaced an average of every 10 years. Out in the suburbs, you would think our corner street signs should last triple that time, and could be replaced for about $25 each. Is there that much abuse in the city? Are these things really that expensive?

A quick search online indicated the larger high quality signs were upwards of $80 each if you buy only one. Wow!

I generally enjoy reading Warner Todd Huston’s stuff as a contributor to Gateway Pundit, but he’s barking up the wrong tree on this one.

One other thing. Follow the money. Who owns the companies that have the contract to make these signs?

“My son’s losing hope” Obama: But we passed health care and...