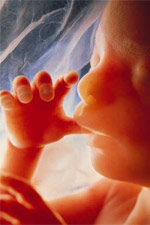 Update to add: Wherever you are, say a prayer for the 10 babies per hour who are aborted in New York City during 2009.

Hat tip to Ed Morrissey at Hot Air for the pointer. I’m making the 2009 Summary of Vital Statistics for the City of New York (PDF, 5.7 MB) available here. I’ll refer to page numbers, which are noted in the PDF.

Morrissey makes a point I want to review. I’m putting my thoughts and figures together very quickly this afternoon, so maybe I’m totally off base … but stick with me.

The data does not show the residential status of the mothers at the time of the outcomes, but only that the outcomes took place in New York City.  It is entirely possible that significant numbers of women seeking abortions come to New York City to get them from outside of the city; in fact, it’s probably more likely than not, considering the concentration of abortion services in major metropolitan areas.

Morrissey may be referring to the note below table 4.10 on page 81, which notes the data specific to teenagers and includes all “events occurring in NYC regardless of residence.” But if you look at table 4.13 on page 85 the report specifically lists borough of residence, and has categories for none-residents and residence unknown. You can confirm this by comparing the numbers in tables 4.10 and 4.13.

Table 4.13 indicates 18,361 of the pregnancies registers were from non-residents or unknowns. The question … Does the report’s definition of borough of residence mean what we think it means? I take it to mean that is where the mother lives.

I’ll run the numbers with table 4.13, and exclude the non-residents and unknowns in the following calculations.

Here is a screen shot from page 85, please click to see the full size view. Note that I’m not showing the non-resident and unknowns in this image. In reality, removing those only changes the data by one-tenth of a percent.

The abortion rate for the 19 and under crowd is much worse. If you take a look at the data – again removing the non-residents and unknowns – 12,958 of the 21,232 pregnancies for those 19 and under were induced terminations … abortions.

That works out to 61 percent.

Sister Toldjah is also writing, and there have been a few threads over at Free Republic on this story … but not as much as I expected. New Yorker’s getting ready for the next storm?

$27.5 million to change font of street signs in New York City … but